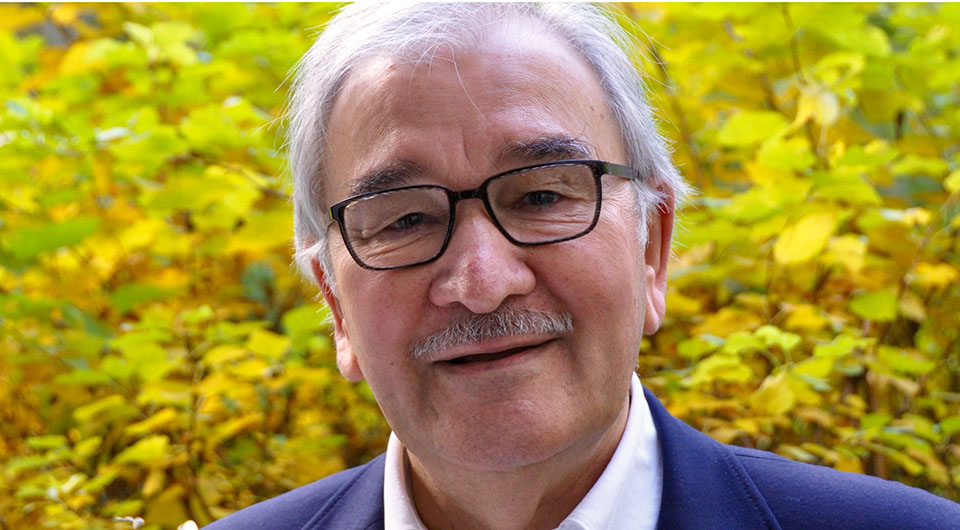 “We have to tell our story!”

Zoni Weisz talks about smiles as motivation, trauma in the aftermath of extermination, and hope in places where one would least expect it.

Interviews with the Dutch Sinto and Holocaust survivor Zoni Weisz are always spine-tingling – so moving is his story, which has made him one of the most important representatives of the Sinti and Roma, so powerful are the words he uses to describe past injustice or to take issue with the present human rights situation in Europe. We met him in Budapest, on the sidelines of a meeting of RomArchive’s advisory board, of which he is a member.

RomArchive: Mr Weisz, it seems natural for you to put a lot of work into the Roma’s civil rights movement, although all you receive in return is the occasional slap on the back or a friendly smile. Where do you get your motivation from?

Zoni Weisz: As a matter of fact, smiles are part of my motivation! It’s true that work is getting more and more arduous at my age, but look: I’m a Sinto, and the situation of our people, the Sinti and Roma, is distressing. I lost my entire family in the times of National Socialism. This is something that must never happen again. Never again must a people be completely marginalised and murdered. But society has learned next to nothing. I want our young people to have a future. They should no longer suffer from marginalisation, but have equal access to education and work. In Eastern Europe it is even worse: there are many places with no future, because Roma are often completely marginalised. The stigma is so strong that they don’t have any prospects. Many come to Western Europe, then, in the hope of a better life – not only for themselves, but also for their children.

RomArchive: A key moment in your work was the speech you gave at the hour in commemoration of the victims of National Socialism – as the first representative of your minority ever – on 27 January 2011 in the Bundestag.

Zoni Weisz: This was the first time ever that a member of our minority gave a speech in the Bundestag. In light of the history of our persecution, this seemed inconceivable! But it was a great opportunity. I had exactly 50 minutes. And I had a lot to tell, an awful lot. Not only about what happened in the Nazi era. That’s always there, in the background. Of course I talked about the Holocaust, the genocide against our people, against the Jews and the many other victims. But I also told my personal story and, even then, I mentioned the situation of the Roma in Eastern Europe.

RomArchive: If anything, the situation has worsened since.

Zoni Weisz: Indeed. And this is what I’ve emphasised again and again at the Council of Europe, and I’ll also say it to the UN! These are two different things: one is what I call “the forgotten holocaust”, the other is the human rights situation in Europe. And when you look back and see that almost nothing has changed … horrible!

RomArchive: You’ve just mentioned the human rights situation. The media often portray Roma as not belonging to Europe or their respective European home countries, as a kind of perpetual migrants …

Zoni Weisz: … who don’t have any rights! But we have lived in Europe for centuries, in the Netherlands, in Germany, in Hungary. What is more, human rights are universal! This is very important, we should never forget it. We must fight marginalisation and discrimination together. It’s something that concerns us all, the majority populations in particular. It is all too often forgotten that fighting discrimination shouldn’t be the job of those being discriminated against, but of those from whose side discrimination originates.

RomArchive: In Germany it took the very successful civil rights movement of the Sinti and Roma, led by Romani Rose, for the injustice to be recognised as such after decades. You are from Holland, and you are out and about a lot. So what is it like in other European countries?

Zoni Weisz: The situation is bad everywhere. And in most countries there are significantly fewer autonomous organisations than in Germany. In the Netherlands, the government has recently cut off our money supply. Now there is no longer a proper organisation of Sinti and Roma, only a handful of smaller ones.

RomArchive: The outcry must have been tremendous.

Zoni Weisz: Not at all. Our government has adopted a law that no longer allows exceptions for minorities. It’s very unfortunate. The lack of any reaction is symptomatic of the interaction with our minority. We’ll have to do something about this all over Europe. It’ll take more people who are open about their identity and explain what’s going on, what we want, that we are – and want to be – part of the societies of our home countries. The stigma is very strong.

RomArchive: Where does this stigma come from?

Zoni Weisz: It is centuries old and it is complex. But at bottom we are all xenophobic to some degree – we are all afraid of the unfamiliar. And that’s also the key to the problem. I’m convinced that it will take generations until we are equal. But in the meantime we’ve got to work at it and mobilise our people to go outside and make it known that we are people just like everybody else. We have to tell our story! To me that is a major contribution towards a better future. For instance, through art! Through art we can tell a very powerful story and experience our own identity as something positive. In Holland, we have a huge music industry, especially of the Sinti. They travel all around the world. This is not only very good for our image; the influence of the larger world also has an impact on the small circle in which people have lived for such a long time – the circle opens up.

RomArchive: Music as a universal language?

Zoni Weisz: Yes, but not only music. Painting, dance, film, all the other arts. For the first time in our history we are sharing a part of our culture with the outside world, and anybody will be able to see with a mouse click who we are, what our history is, what is expressed in our art.

RomArchive: You’re referring to RomArchive, of whose advisory board you are a member: a digital archive for art of the Roma that is to make these stories visible.

Zoni Weisz: This is exactly where RomArchive comes into play. Romani Rose once said, “To change the situation of our minority, we must respond to stereotypes with a self-told counter-history!” This is how we’ll come closer to each other. This is where we’ll have to start in order to overcome xenophobia. The gadjos will then see us through different eyes. We’ll no longer be just dirty “gypsies”, but people like them. This is why RomArchive is so important. After all, nobody knows that there is Roma literature as well. All this is going to be shown.

Zoni Weisz: Absolutely. This is something we have discussed at length at meetings of the advisory board. Should RomArchive show art only, or history as well? But, of course, what is art without its context? Nothing. We are not creating RomArchive for Roma and Sinti alone. They form only a small part [of our target audience]. RomArchive will be accessible to the entire world. This is happening for the first time, and we have to think about it very carefully. But, as far as reasonable, we need to share our culture. I think that this is important.

RomArchive: RomArchive is geared towards majority populations and Roma alike. How will RomArchive affect Roma?

Zoni Weisz: Many Roma, especially young people, have no idea of their own history. They don’t know that there are Roma all over the world. Only the Jews and our people are scattered all over the world. But when a Rom or a Sinto from Brazil comes to Budapest, then there is something that connects us, or isn’t there? RomArchive will have to facilitate a positive experience of our own identity. This is a precondition for a self-assured integration. The alternatives are marginalisation and assimilation. Unfortunately, there are many well-educated Sinti and Roma who don’t want to know that they are a Rom or Sinto or a Romni or Sintiza.

I can see this with my own son. He says, “Tata, you know, it isn’t always an advantage to be a Sinto.” And he doesn’t always tell that he is a Sinto. In his head, in his heart, there is the loss of his grandparents and his aunt. The Second World War plays a role, it’s always present in the background. It’ll take generations until that’s gone.

RomArchive: On 2 August 2014, a thousand teenaged Roma went to Auschwitz to commemorate the deceased. Does it fill you with hope that young Roma go to Auschwitz not only to improve their understanding of their own history, but also to look for new ways to spread their knowledge?

Zoni Weisz: Yes, of course. I wasn’t in Auschwitz last year, unfortunately, but two years earlier I showed a large group of young people around and explained what had happened. In Birkenau there is a small pond. When we were all standing around this pond – it lies close to Crematorium No. 5, where the “gypsies” were killed – we all had the feeling that we belonged together. What had happened there is our history. We were absolutely silent.

We could hear the rustling of the birch trees. The water where it all had happened. That was beautiful, in a very melancholic, a very hopeful way. Can one imagine that such abhorrent deeds were done in such serene surroundings, or, the other way round, that such an experience is possible at such a ghastly place? I couldn’t quite believe it. But, more importantly, the teenagers couldn’t either. At this moment we knew that we belonged together. We became aware of our common history. Such experiences have an influence on one’s identity – and thus on the future.

RomArchive: Mr Weisz, thank you for this interview.

Zoni Weisz was interviewed by Gilda Horvath and Armin Ulm.

As a seven-year old boy, Zoni Weisz had to witness his family’s deportation to Auschwitz. It was only by chance that he survived the Nazi terror. Later, he built a successful career as a florist, designing, for instance, flower arrangements for the coronation of Queen Beatrix of the Netherlands, the wedding of Crown Prince Willem-Alexander, and the ceremony “50 Jahre Deutscher Bundestag”. He was the first representative of his minority to speak in the Bundestag, on 27 January 2011 at the hour in commemoration of the victims of National Socialism. On 24 October 2012, at the inauguration of the Memorial to the Sinti and Roma of Europe Murdered Under the National Socialist Regime, he gave a speech as a representative of the survivors. On 27 January 2016 he spoke to the United Nations. 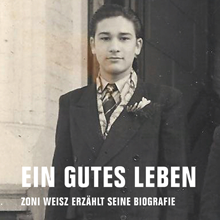 His biography “Ein gutes Leben” (“A Good Life”) has been published as an audio book in  2016 by Verbrecher Verlag.