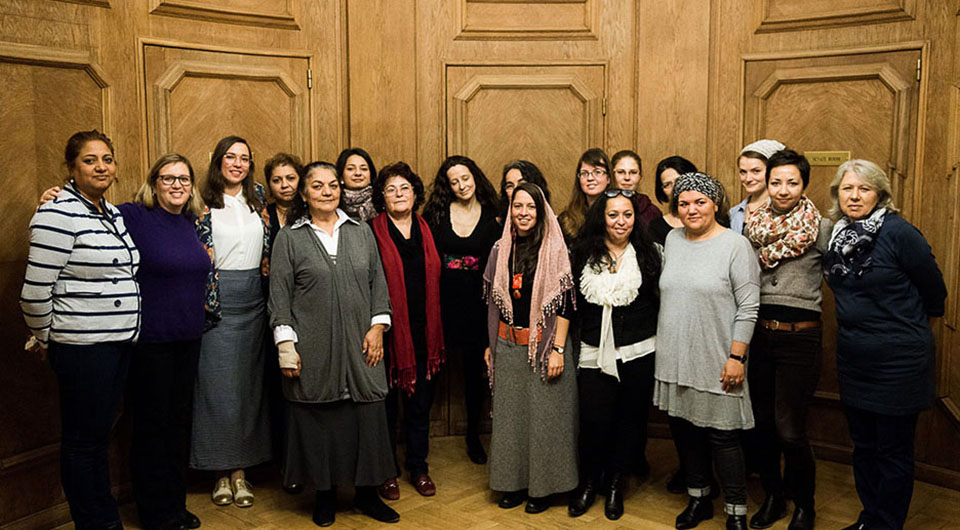 Dr Anna Mirga-Kruszelnicka and Dr Angéla Kóczé are part of the curatorial team of RomArchive’s section on the Romani Civil Rights Movement.

This poem resonates with the experience of Romani women’s historical, social and political experience in Europe. Writing about women’s experience in the Romani civil rights movement could break the silence that has been imposed for centuries. We feel obliged to talk about Romani women’s experiences because it “has been silent too long”. The RomArchive is an extraordinary opportunity to come to voice, to write, to re-claim and recover our lost voices in the struggle with the Roma and non-Roma patriarchy and with the stereotypes and prejudices associated with Romani women.

Romani women are considerably behind in most key areas of life such as employment, education level or health in comparison to non-Romani women but also in comparison to Romani men[2]. Not only do they have to face the existing Roma and non-Roma patriarchy, but they also have to deal with deep-seated anti-gypsyism in its various forms and manifestations. For Romani women, the variables of gender, race/ethnicity, nationality (as for example in the context of immigrant Romanian Romani women), class, age and sexual orientation intersect, make them a particularly vulnerable social group.

But this is not a tale of victimization; rather, for some women, it is a source of empowerment and resilience. Despite these difficulties, Romani women are not without agency and a considerable potential for generating change – not only within their own lives and communities, but also more broadly.

Aware of their specific social status, of particular needs and interests and of the obstacles they face at the intersection of patriarchy and racism, Romani women have gradually searched for their own voice. Although individual Romani women were active in political and social struggles in a number of European countries (for example Katarina Taikon in Sweden, Ágnes Daróczi in Hungary, Leticia Mark in Romania or Nadezhda Demeter in Russia), it wasn’t until the early 1990s that the Romani women’s movement began to crystallize. It is then that the first Romani women organizations emerge: first in Spain and later on throughout Central and Eastern Europe.

The “Gitanas movement” – Spanish Romani women activism – emerged in 1990 and developed dynamically throughout the decade, building up a strong identity as a distinct movement of its own: one which distinguished itself from the men-driven Romani movement and from the mainstream women’s movement in Spain. Gitanas activism articulated intersectional interests – as women and as members of an ethnic minority – dealing simultaneously with ‘machismo’ and patriarchy, deeply engrained into the Spanish majority society, and with racism, or more specifically, historically rooted anti-gypsyism, which Gitano community has been facing for centuries.

The Romani women’s movement emerged as a response to the perceived lack of representation, in search of a voice which would articulate the collective needs and interests of Romani women. On the one hand, the Romani associative movement, was generally not sensitive to specific issues of women. The Romani movement was (and in fact, continues to be) heavily dominated by men and, as such, it has not provided the necessary space for dialogue, involvement and collaboration with Romani women. On the other hand, the feminist movements were not inclusive or representative of Romani women sensibilities; the feminist agendas of mainstream women’s movements did not include the perspective of Romanias specifically.

This process was also inspired by other minority or subaltern women’s struggles. There were different intellectual, political and cultural roots of the so-called Romani feminisms in Europe and a number of inspiring sources that led to a discussion on the intersection of racism, sexism, and classism. These sources include among others the concept of intersectionality. They sparked ideas that relate to the criticism of lack of solidarity and representation of others, such as Romani women by white feminists.

Scholarship of Black feminists in the US was especially resonating with European Romani women intellectuals. Various Black feminist scholars were able to articulate the complex reality of black women at the intersection of race, gender, and class as well as to challenge the concept of „global sisterhood” that did not account for class and racial inequalities and the mono-focal identity politics in the black movement. For many Romani women activists their writings were a reference point. Increasingly, these ideas were adopted for the use of Romani political activism in an attempt to challenge the monolithic concept of “Romani women” and introduce more plural and diversified narratives and expressions of Romani political identity. Furthermore, the universal or “global sisterhood”, which became a governing idea from 1970s through today, proclaims the shared essentialized identities of womanhood and shared gender oppression by patriarchy. This unifying global feminist idea has been criticized mainly by black women, women of color, and “Third-world feminists”, by arguing that this view is privileging white, middle class “western women” and does not pay a specific attention to other women than those of the white middle class. These kinds of arguments which were put forward by mainly black, postcolonial, “Third-world” feminists significantly shape the conceptual language of Romani feminists in Europe.

Nonetheless, the gradual emergence of a Romani women’s movement in Europe – as a separate branch of Romani political activism – was not limited exclusively to the elites or Romani women with higher education. Arguably, there is a joint consciousness which Romani women’s activism evoked – that of a pre-existing collective identity as women and as Roma, the self-awareness of their disadvantaged situation and multiple challenges they face as women and as members of a stigmatized minority. The discourse of Romani women activists resonates broadly with Romani women, disregarding class and socio-economic situation, age and level of formal education. The rationale of this struggle, at the intersection of gender equality and anti-racist agendas, led to the crystallization of a well-articulated collective framework. Romani women’s organizations and leaders embraced the concept of feminism as a rationale for their own emancipation and self-fulfilment, but embraced it critically, adapting the “white feminism” approach to values and traditions of Romani communities, giving way to the establishment of “Romani feminism”.

The process of emergence and evolution of the Romani women’s movement (both in national and international contexts) was nonetheless, not without its tensions and challenges. Despite support and encouragement by many Romani men, there have been recurrent claims and criticism, since the appearance of Romani women’s activism, regarding claimed fragmentation of Romani associative structures along gender lines, referring to those initiatives which tend to exclude men from participating; criticism which was also common on the European level when Romani women’s rights movement emerged[3]. In fact, “In spite of the powerful potentials of Romani women’s position to challenge wider patriarchal structures in society, a division between the focus on ‘ethnicity’ and the focus on the intersection of ‘gender’ and ‘ethnicity’ women’s and gender perspectives is pertinent to the Romani movement”[4]. Furthermore, the various forms and discourses of Romani women activists are not homogeneous. Competing or opposing narratives can be detected not only among different stands of “Romani feminism” but, more importantly, between genders.

Nonetheless, increasing salience and visibility of Romani women’s voices, which articulate concerns and issues stemming from their intersecting gender, ethnic and class roles and positions, is an undoubted fact. In the sphere of political activism, the growing and proliferating number of Romani women organizations and leaders across Europe is a sign of this development. Romani women have notably occupied significant roles and positions: for example, the were more Romani women MEPs than men (Lívia Járóka, Viktória Mohácsi and Soraya Post). Nonetheless, the salience of a Romani woman’s voice is not restricted exclusively to the area of political activism. In the world of academia, the recent years have also witnessed a dynamic development of Romani women scholars (for example, Dr Ethel Brooks, Dr Magda Matache, Dr Petra Gelbart or Dr Ana Giménez Adelantado). Romani women have also emerged with strong, outstanding voices in different areas of arts and culture, and many of them explicitly tackling the issues related not only to their ethnic background but also to their status as Romani women (for example, Selma Selman, Mihaela Drăgan, Delain Le Bas, Tímea Junghaus or Erika Lakatos). Many of them are at the forefront not only of Romani communities but also as contemporary thinkers and producers.

The sensibilities stemming from the intersecting racialized lived experiences of Romani women can reveal and articulate issues which go beyond the specific plight for Romani rights. Rather, it helps to expose the dynamics of misogyny, patriarchal and paternalistic cultures of mainstream societies, on the one hand, and of the intolerance, xenophobia and racism affecting our communities, on the other.

This article draws from the chapter by Angéla Kóczé and Anna Mirga-Kruszelnicka “Emancipation and Passionate Politics: Impact of Various Feminisms on Eastern European Romani Women’s Activism”. In „A Reflexive History of the Romani Women’s Movement: Struggles and Debates in Central and Eastern Europe“, edited by Jovanovic J., Kóczé A., Vincze E. and Zentai V. (forthcoming)

Image above: Participants at the workshop of  “Intersections of Gender, Ethnicity, and Class: Reflexive History and Future of  the Romani Movement”, organized by the Center for Policy Studies, Central European University and  the Friedrich- Ebert-Stiftung. It was held on October 30-31, 2015, Budapest.